Find a specialist to make an appointment 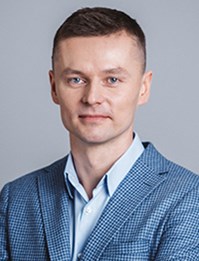 Paweł Bąkowski specialises in treating diseases and injuries of the lower limb (hip, knee and ankle joints). His interests focus on arthroscopic procedures, sports injuries as well as paediatric traumatology. In his work he uses the knowledge and experience gained during the courses and trainings he regularly attends. In this way, he continues to improve the way he diagnoses and treats injuries in his patients.

Without scientific development, there is no progress. According to this principle, Paweł Bąkowski, an orthopaedist from Poznań, also devotes a large part of his activity to scientific research. In 2018, he defended his dissertation on percutaneous suturing of a ruptured Achilles tendon, earning a doctorate in medicine. In addition, he participates in scientific projects on the treatment of articular cartilage pathology, meniscus injuries, knee pain, Achilles tendon injuries and collagen supplementation.

In the years 2010-2013 Paweł Bąkowski was a doctor of the Polish football champion KKS Lech Poznań. This period gave him a large dose of experience in working with athletes. He also gained professional experience working in the Orthopaedic Department of the Provincial Hospital in Poznań and the Department of Paediatric Orthopaedics and Traumatology of the Children's Hospital in Poznań. Currently works at Rehasport in Poznan. 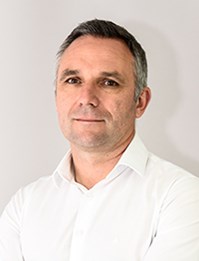 Graduated from Medical University of Gdańsk. For 7 years he worked as an assistant in the Provincial Trauma and Orthopaedic Department of the M. Kopernik Pomeranian Traumatology Centre. in Gdańsk. Since 2012 he has been associated with the Gdansk branch of Rehasport as a doctor and Medical Director.

Maciej Pawlak specialises in orthopaedics and traumatology of the musculoskeletal system with a focus on the knee, hip and shoulder joints. He is an international trainer in shoulder and knee surgery at Smith and Nephew, running practical courses for orthopaedists both in Poland and abroad (Boston, York, Watford).

Maciej Pawlak is passionate about sport, particularly football, basketball and tennis, which he has played regularly for many years. He combines his passion for sport with medicine, he is a licensed doctor of the Polish Football Association (PZPN) since 2006 taking care of the players of Lechia Gdańsk, he had the honour to be a member of the Gdańsk Sports Council (2015-2018) appointed by the Mayor of the City of Gdańsk Paweł Adamowicz. 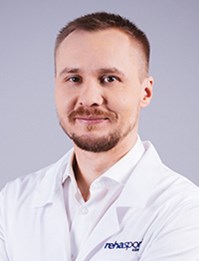 Graduate of Doctor Deparment of the Medical University of Gdańsk. Dominik Sojak worked for 6 years as an assistant-resident in the Trauma and Orthopaedic Department of the M. Kopernik Pomeranian Traumatology Centre, Followed by the Copernicus Hospital in Gdansk. Since 2012 he has been associated with the Gdansk branch of Rehasport as a consultant doctor.

Dominik Sojak has been interested in orthopaedics since his student days. Another great passion of the orthopaedist from Gdansk is sport, especially combat sports and football, which he has been trying to practice regularly for many years. He combines his passion for sport with medicine, he is a licensed doctor of the Polish Football Association (PZPN) since 2012 taking care of the players of Lechia Gdańsk, he had the honour to be a coordinator doctor of the medical team for the International Association of Athletics Federations (IAAF), Sopot 2014 He also participated in the 2015 training camp of the U-18 National Football Team of the Polish Football Association. 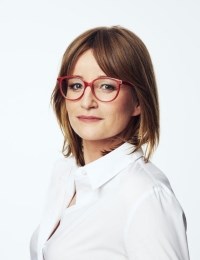 Doctor Joanna Walecka is a specialist in orthopaedics and traumatology of the musculoskeletal system. Her area of special interest is the conservative and surgical treatment of shoulder, elbow and wrist conditions. working to develop the use of platelet rich plasma in the treatment of orthopaedic conditions. In the future, she wants to focus on minimally invasive surgical methods.

Joanna Walecka lectures at international conferences of the European Society for Shoulder and Elbow Surgery. Secretary of the Polish Shoulder and Elbow Society. She spent a year as a trainee in shoulder and elbow disease at a Clinic in the UK. She is also a recipient of the prestigious SECEC Travelling Europe scholarship.

Joanna Walecka is a member of many societies: 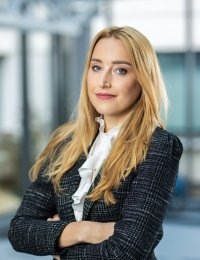 Graduate of the Faculty of Medicine of the Medical University of Poznan. She completed her specialisation in orthopaedics and traumatology at the Department of General Orthopaedics, Oncology and Traumatology of the W. Dega Clinical Hospital for Orthopaedics and Rehabilitation in Poznań, where she gained professional experience. She has taken part in scientific work and projects as well as numerous further training courses.

In 2011/12 she served as a doctor of the National Team of the Polish Fencing Association.

Dr Marta Krzyszczuk specialises in orthopaedics and traumatology of the musculoskeletal system. She specialises in arthroscopy of the knee joint, arthroscopy of the ankle and knee joint, as well as corrective procedures of the foot and the ankle and knee joint and procedures on soft tissues of the lower limb. Her professional interests are related to the operative and non-operative treatment of overload syndromes and injuries in competitive and recreational sports, surgery of the foot and ankle and shin joint, surgery of the knee joint, and disorders of the hip joint. 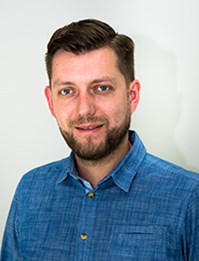 Graduate of Doctor Deparment of the Medical University of Gdańsk. Arkadiusz Szycman holds a specialisation in Orthopaedics and Traumatology of the Locomotor System. Since 2013 he has been working in the Department of Trauma and Orthopaedic Surgery at the “Copernicus” Sp. Z o.o. Hospital in Gdańsk. Regularly attends national and international training courses, symposia and lectures, keeping up to date with all developments in modern medicine.

Gdańsk orthopaedist, Arkadiusz Szycman - professional interests focus on sports medicine, surgery of the knee and shoulder joints, applications of minimally invasive techniques and ultrasonography in orthopaedics. He is also expanding his knowledge of regenerative medicine. Always tries to approach medical problems holistically and tailor treatment to the individual needs of patients.

Arkadiusz Szycman belongs to scientific societies: A member of the Polish Society of Orthopaedics and Traumatology and the Polish Arthroscopy Society. 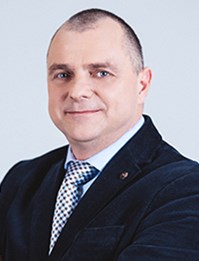 Dr Mirosław Szarzyński completed his medical studies in 1994 in Freiburg (Germany). After graduation he worked in the department of surgery at the university clinic under prof. Farthmann, where he completed his specialisation in general surgery. During this specialisation he was also an assistant in cardiac surgery (prof. Beyersdorf) and thoracic surgery (prof. J.Hasse). He began his next specialisation (trauma surgery and traumatology) under Prof. N. Sudkampa in the Department of Trauma Surgery, Traumatology, Orthopaedics and Sports Medicine at the same clinic. After almost three years, he moved in 2002 to Schwerte near Dortmund to complete his residency at the surgical clinic of the University of Witten / Herdecke under Prof. R. Labitzke specialised in trauma surgery and traumatology and became Chief of Surgery (2004). In Schwerte he focused on arthroscopy, trauma orthopaedics and joint prosthetics. He completed further specialisations [i.e. sports medicine (Sportmedizin) and Orthopaedics and Traumatology] also in Germany.

Mirosław Szarzyński has cooperated with NZOZ Arthros Nałęczów and the Arthroscopic Outpatient Clinic in Olsztyn since 2005, performing arthroscopic surgeries. After returning to Poland in 2007, cooperation with these centres continued. At Arthros NZOZ he co-founded the centre for arthroscopic shoulder surgery. Currently, he is a consultant and operates exclusively in Warsaw (also under the NFZ). 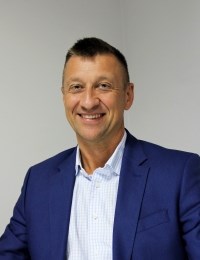 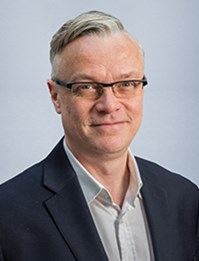 Dr Marek Stawniak is a medical doctor specialising in surgery and orthopaedics and traumatology of the musculoskeletal system.

In 1992, he started his postgraduate training at the Department of General Surgery of the J. Struś City Hospital in Poznań. In the following years, he continued his career in several private and public centres, gaining new competences and skills in orthopaedics and traumatology of musculoskeletal system. The orthopaedic surgeon from Poznan has been associated with Rehasport Clinic since 2005. In the meantime, he has completed numerous internships in Poland and abroad, including the Department of General Surgery, Free University Hospital, Amsterdam, the Netherlands and the Department of Plastic Surgery, Hospital Central de Asturias, Oviedo, Spain.

Dr Stawniak is a member of the Polish Society of Orthopaedics and Traumatology and the Polish Hand Surgery Society.

He devotes his free time to travelling and off-road vehicle rallies. He is passionate about history. 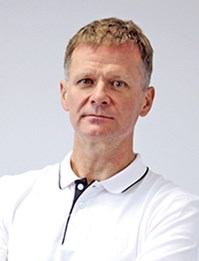 Graduated from Karol Marcinkowski Pozań University of Medical Sciences Worked in the Department of Orthopaedics at the Wiktor Dega Clinical Hospital in Poznań in Poznań and at the Department of Orthopaedics of the Academic Clinical Hospital in Wrocław. He has taken part in many international courses, including in the UK, France, Germany, the US and Portugal.

Outside the hospital, orthopaedic surgeon Wojciech Jurasz is an active cyclist, duathlete and triathlete - regularly competing in amateur events. 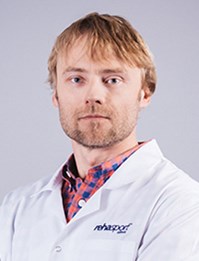 Graduated from Medical University of Gdańsk. Paweł Rybak - for 6 years he worked as an assistant in the Provincial Trauma and Orthopaedic Department of the M. Kopernik Pomeranian Traumatology Centre. in Gdańsk. Since 2012 he has been associated with the Gdansk branch of Rehasport.

A memebr of the Polish Shoulder and Elbow Society, the Polish Arthroscopy Society and The European Society of Sports Traumatology, Knee Surgery and Arthroscopy ESSKA.

Paweł Rybak specialises in orthopaedics and traumatology of the musculoskeletal system with a focus on the knee, ankle and shoulder joints. His passion is sport, especially kitesurfing and road cycling. 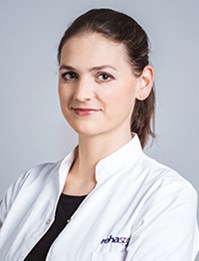 Marta Ślęzak graduated from the Faculty of Medicine I of the Medical University in Cracow. in Poznań. She is a specialist in orthopaedics and traumatology of the musculoskeletal system, which she gained in the Orthopaedic and Rehabilitation Clinical Hospital named after the founder of the hospital. of Karol Marcinkowski Medical University in Poznań. Her areas of interest include medical issues related to orthopaedic conditions and upper limb injuries.

Marta Slezak gained her experience at the Centre für Muskuloskeletale Chirurgie, Charité in Berlin. At the same time, he is gaining recognition in the scientific world with numerous congress presentations and publications. She has an open doctoral thesis entitled. "Polish cultural adaptation and validation of questionnaires used in the diagnosis and treatment of shoulder diseases", whose supervisor is prof.. Przemysław Lubiatowski.

Marta Ślęzak provides didactic activity in the field of Orthopaedics for medical students of the Medical University in Poznań. Additionally, he appoints the position of managing editor of the journal Practical Orthopaedics and Traumatology. 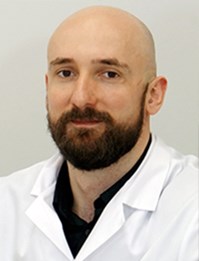 Graduate of the Faculty of Medicine of the Medical University of Poznan. Specialist in orthopaedics and traumatology of the locomotor system. 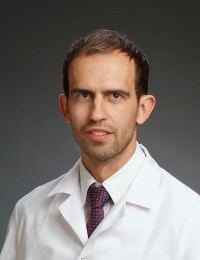 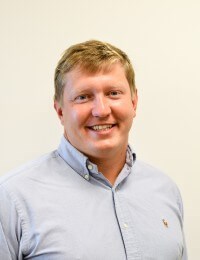 Graduate of the Faculty of Medical Sciences at the University of Warmia and Mazury in Olsztyn. He did his postgraduate internship at the M. Kopernik Hospital in Gdańsk. He completed his first three years of specialisation training at the Department of Trauma and Orthopaedic Surgery of the M. Copernicus Hospital in Gdansk (former railway department). After this period, he was employed in the department of trauma and orthopaedic surgery at the St. Wojciech Hospital in Gdańsk where he still works today.

Dr Tomasz Mulewski's work includes trauma and reconstructive surgery. On a daily basis, he performs a wide range of trauma procedures in the treatment of upper and lower limb bone fractures, reconstruction and repair of damaged ligaments, tendons and muscles. In addition, he performs alloplasties of the hip joint. He also performs small procedures in the upper limb such as surgical treatment of carpal tunnel syndrome, snapping fingers and ulnar nerve releases at the level of the groove. She has worked in the ED for five years, where patients with serious injuries from accidents are taken.

Privately, she loves to cook and eat. He plays squash and whenever he has a moment he rides an Enduro motorbike. He is interested in speedway and has been working with the Speedway Club of Gdansk for several years and is a doctor of speedway competitions, during which he provides medical assistance.

Za chwilę nastąpi przekierowanie na stronę sklep.medicover.pl
Tam dokończysz proces umawiania wizyty do naszego specjalisty.
Speech recognition in progress
In a moment you will be redirected to the booking system.